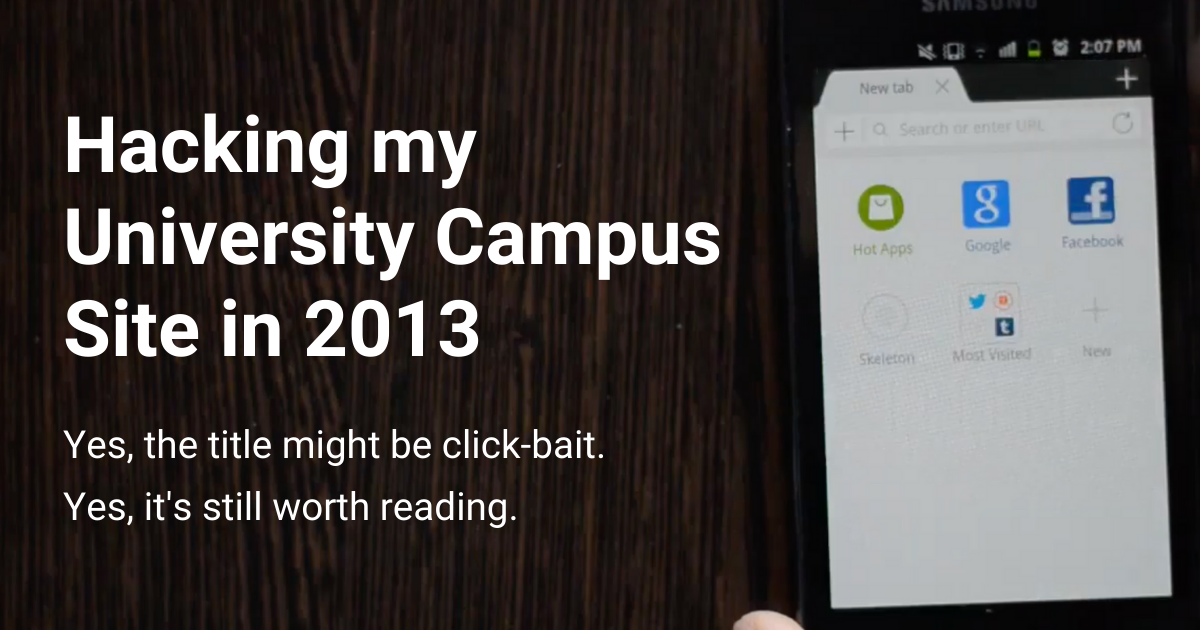 This story is about an side-project I built in 2013.

Back then my university online campus site sucked. I hacked a solution that allowed me and other students to know what was going on in a much faster and convenient way. It reached 115 active students and after 3 months I shut it down for security reasons.

2012 was a golden age for mobile apps. Facebook had just released their new fully native iOS app, that was two times faster than the previous one. Twitter active users were growing, and the Twitter fail whale (indicating Twitter was down) was a thing of the past. Instagram was the new popular kid in the block, and Facebook quickly acquired them afraid of Twitter moving first.

All of this created high expectations from mobile web users consuming information on the go. Even though the mobile internet speed in Argentina was slow (and I guess it still is), we all expected the mobile experience to be perfect.

Around that time I was a software engineering student, and I remember looking everywhere for problems that I could solve with technology.

I was totally frustrated with our University’s own online campus site. It was slow and didn’t work correctly on our phones. I found myself multiple times arriving to classes only to find out there was no classes that day. Or, arriving late due to last minute changes. Stress was only being multiplied - on every semester we had at least 24 exams, after each one of them we were frantically refreshing our screens on our phones to find out the results.

As any other student I was an expert procrastinator. Mathematical Analysis II mid-term exam was around the corner, but creating something a new thing has always been more tempting than studying for an exam.

A weekend here, a weekend there, I put together the first MVP. It was super fast mobile-first web applicaction that let students log in with their University credentials and read all type of updates from the classes they were enrolled in.

How did it work?
I don’t want to get that technical, but now that you asked:

The truth is that programming a web application only gets you half-way. It was a great solution for me, I wanted to share it with my fellow students. My goal was to launch a small, but cool product.

I made this marketing video and shared it with friends and on university networks.

The video is in Spanish, with English subtitles via YouTube

In the end, I decided to shut the app down due to my own security concerns. It’s fair to say the app was properly secured with HTTPS at a time when it wasn’t a common thing for non-banking apps. On the other hand, it wasn’t using best practices for handling user’s passwords and made me feel uncomfortable.

I might have taken the product outline too far.

This was just a little side-project for me. I wasn’t measuring success, I was just frustrated with the old solution provided by the university. In the end, it seems other students felt the same, and at least 115 others were actively using what I had built, and with pretty good feedback too.

In hindsight, this was my way of training the product-building muscle and it also opened new opportunities for me. Building side-projects has a huge ROI.

That’s one lesson learned I don’t get tired of sharing with high school and university students looking for career advice, regardless of the path.

Get more stories and insights like these in your inbox.

Check your inbox to confirm your subscription.

→ Go to Gmail (Make sure to check the "Promotions" tab)

A Minimal Guide to Launching Your Remote Podcast for Free

Avoid This Trap When Building a Purchase Funnel

Building a Side-Project Without Burning Out

4 Ways I Use Data At My New Job

On Being A Curator

Writing to Level Up

A Killer Feature for Quarantine

Hummus and Tech on the News

Handling the Unknown vs Creativity

Change your KPIs - From Dev to PM

Forget About The Features, UX and Specs

The Ultimate Leadership Lesson (in 3 mins)

Live on the radio